Getting My Life Back! A Story of 100 Lost Pounds

Getting My Life Back! A Story of 100 Lost Pounds

Hello, everyone! My name is Trisha and I want to share my story. It may start gruesome and sad, but there is a happy end, I promise! About a year ago I was about 400 pounds. I was fat. There is no denying that. However, it is not the surprising part. The real shocking thing to many would be hearing that I was about 120 pounds only five years ago. That’s right, I gained nearly 300 pounds…

I nearly lost my husband. My libido was gone and doctors said that I would never be able to have a baby if I did not lose weight. I honestly believed that my life was ruined once and for all. I did not want to pick a diet and stick to eat. I wanted to eat myself to death…

The Realization of Truth

I’ve always been a slightly troubled girl. My father tried to sexually assault me. My parents divorced shortly after the incident. We moved from state to state five times. Making friends was really hard for me. While the incident with my father did not really destroy me mentally, it created a tight bond between me and my mother. She supported me so much and helped me go through school and college.

I met my husband in my second year in college. We clicked instantly. Everything seemed so whimsical. I thought that it was my fairytale and that my ruined childhood was a mere setback. Then, my mom was diagnosed with pancreatic cancer. She managed to hold on for two years. We spend a lot of money on treatment and got in a huge debt. Despite our best efforts, my mom died.

I was pregnant at the moment. I guess it was too much for me. I miscarried and that was the moment when my life started going downhill. I did not know what to do. I cried all the time and found solace only in eating. I just ate and ate… I couldn’t and did not want to stop. My husband was too worried about me to stop me from eating during the first year… Then, it was just too late.

I gained 100 pounds, then another hundred pounds, and then I was 400lbs. My husband tried to get me in shape and bought me an expensive gym membership, he would constantly talk about new diets. I would not listen to any of that. I was binge eating at nights to the point when I had to puke. I would watch TV shows and eat. Nothing else.

The turning point was when my husband told me that he had enough of me. If I did not lose weight, he would abandon me. He said that he wanted to have children and build a family. Something that I couldn’t help him with until I lost some weight. My worst mistake was to say that I did not want to hold him hostage and let him go… I realized that I was in trouble but I did not want to change.

My husband actually left me. I was alone and even more miserable than before. Again, I was in darkness and there was no light at the end of the tunnel. One of my friends decided to help me out and visited me once with a psychologist. Girls, if you ever find yourself in a problem like mine, just do that. Visit a specialist and talk. A couple of long conversations with a professional made me realize another thing: I had obligations. If I wanted to make my mother proud of me, up there, I needed to keep going. I needed to make a family and find a purpose to live.

I called my husband and told him that I want to change. I expected some kind of indifference but he was so happy to hear that. He arrived at my doorstep on the next day after living apart for three long months. He said that he would do everything to help me…

The sad part was that I didn’t know where to start. Find a diet? Renew my gym membership? What was I supposed to do? It is so hard to start something… One of my friends recommended me to go to a dietician and ask for advice. So I did. I received some recommendations and decided to walk at least a mile per day. Walking was hard but manageable. However, diet was very tough. I just couldn’t stick to eat and would cheat every once in a while. My husband was again quite worried about it and we had a couple of quarrels… I confessed that I couldn’t stop eating. We thought about radical measures like locking me indoors and stuff like that. Yet, I needed to work. We were still in debt and doing something radical was out of the question if we were to ever get from the under.

Again, my friend suggested me LeanDiet. It was a natural remedy with extracts like goji berries and other heavily advertised supplements. The difference was that LeanDiet was a mixture of many extracts. I had nothing to lose and decided to give it a shot.

I couldn’t believe my results! The best thing about this product is that it reduces the feeling of hunger. I could finally get by on a single carrot or a cucumber during the day. I did not feel an urge to eat midnight. Also, the weight started going down fast. I lost about 20 pounds in three days. It was mostly water, I guess. The weight loss slowed down a bit later on, but I kept losing excess pounds!

Yesterday, I got on the scale and saw 298! I lost more than 100 pounds. It took a long month, but it was worth it. I had to stick to a very rough diet and spent hours walking back and forth in the yard, but it was worth it. Tomorrow, I’m visiting my physician and will talk about my hormones and libido. I want to have a baby! I feel alive once again! What I Wanted to Say Is…

You should never give up and don’t gain weight in the first place. Nothing but bad comes out of excess fat. If or when you get fat, you can lose weight! Be confident, stick to your diet, and don’t be afraid to try something like LeanDiet. You may not believe it, but it can very well be that little push that will change your life! 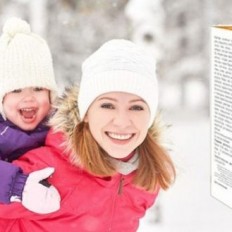 How to Protect Your Kid from Colds and Flus Hey, guys! Helen here with my story. It’s not something special. In fact, I think that the vast maj...